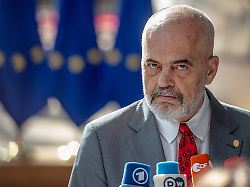 Ukraine is to become a candidate for EU membership, other countries have been for years. The admission fails due to the unity of the EU countries. Albania’s accession to the EU has so far failed due to a Bulgarian blockade. At the Western Balkans meeting, the Albanian prime minister vented his displeasure.

Chancellor Olaf Scholz wants to bring new impetus to the deadlocked EU accession process for six Balkan countries. Countries like North Macedonia and Albania have been waiting for admission to the European Union for almost 20 years, the SPD politician said before an EU-Western Balkans meeting in Brussels. “In my view, it is of the utmost importance that this now becomes a credible promise.” In Brussels, the Western Balkan countries were frustrated by the lack of progress. Albanian Prime Minister Edi Rama described EU member Bulgaria’s blocking of accession talks with North Macedonia and his country as a “disgrace”. “A NATO country – Bulgaria – is holding two other NATO countries – Albania and North Macedonia – hostage amid a hot war in Europe,” Rama said. “And the others watch in their impotence.”

EU foreign policy chief Josep Borrell also said he couldn’t hide his disappointment. The blockade shows once again that the principle of unanimity in the EU is a big problem. The bad mood had already become apparent before the summit. The heads of state and government of Serbia, Albania and North Macedonia kept open a summit boycott until Wednesday afternoon because of the Bulgarian blockade. In 2003, the EU held out the prospect of Albania, North Macedonia, Serbia, Montenegro, Bosnia-Herzegovina and Kosovo joining the EU. However, the process is now deadlocked.

For example, Bulgaria is blocking the start of negotiations with North Macedonia. The reason is, among other things, the desire that the smaller neighboring country respond to demands with regard to minorities, history and language. Albania is also waiting for negotiations to start. Bosnia-Herzegovina and Kosovo are not even official candidate countries. France, which holds the EU Council Presidency until the end of June, wants to end the Bulgarian blockade. A proposal from the French EU Council Presidency is before the parliament in Sofia.

According to Prime Minister Kirill Petkov, this should only be voted on after a responsible parliamentary committee has made a decision. It was only on Wednesday evening that parliament voted no confidence in the pro-Western Petkov, thereby overthrowing his coalition government. At first it was unclear whether there was a majority for the French proposal. Petkov said ahead of the EU summit that he hoped Parliament would make a decision “in the coming days.”

“Ukrainian people should not have too many illusions”

Chancellor Scholz has made it his task to get all six countries moving closer to the EU again. “Germany will support the activities of the western Balkan states on their way to the European Union. We feel responsible for ensuring that these countries succeed in their efforts,” he said. The many efforts made by these states should result in accession. The EU efforts on Ukraine, which has been attacked by Russia, seem to be progressing much faster.

At a regular EU summit on Thursday afternoon, the heads of state and government wanted to decide whether Ukraine and the small neighboring country of Moldova would be granted EU candidate status. EU Council President Charles Michel was optimistic. Belgian Prime Minister Alexander De Croo spoke of a historic moment, but also pointed out that the accession process would take a long time. Albania’s head of government, Rama, recommended that Ukraine not have high expectations, even as an EU candidate. “It’s good to be granted candidate status. But I hope that the Ukrainian people won’t have too many illusions about it.”

A decision on candidate status must be made unanimously by all 27 states. Ukraine, Moldova and Georgia applied for EU membership shortly after the start of the Russian war against Ukraine. Georgia is unlikely to become an EU candidate until it completes further reforms.