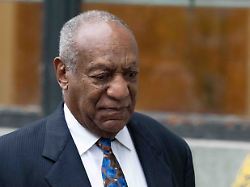 Former US television star Bill Cosby has been found guilty in a civil trial of sexually abusing a teenager in the 1970s. The jury in Santa Monica, California sentenced the 84-year-old to damages.

A jury in Los Angeles found former US comedian Bill Cosby guilty in a civil trial of sexually abusing plaintiff Judy Huth in the 1970s. Huth was 16 years old at the time. Cosby, through his attorneys, had denied the allegations and sought to have the lawsuit dismissed.

The jury, composed of eight women and four men, found 84-year-old Cosby liable for damages and awarded Huth $500,000 in damages.

Huth first filed the lawsuit in 2014, alleging sexual assault and intentional and negligent infliction of mental distress. The original lawsuit alleged the incident happened in 1974, when Huth was 15 years old. However, the time frame was later changed to 1975 when Huth was 16 years old.

In the indictment, Huth said she met Cosby at a park where he was filming a movie. After befriending the girl, Cosby reportedly invited her to accompany him to his tennis club. From there, Huth says, the comedian invited her to a house where he served her and a friend several alcoholic beverages, and then took her to what he called the Playboy Mansion.

Huth claimed that while Cosby knew her age and that of her friend, she instructed the teenagers “that if one of the Playboy bunnies asked them their age, they should say they were 19”. Huth further claimed that Cosby took her to a bedroom in the mansion where he molested her.

Since 2005, more than 50 women have come forward accusing Cosby of sexual assault. Following his 2004 conviction for drugging and sexually abusing Andrea Constand, Cosby served nearly three years in a Pennsylvania state prison before his conviction was overturned on appeal. He was released from prison in September 2021.