“Was a life decision”: Gottschalk regrets divorce “not a day” 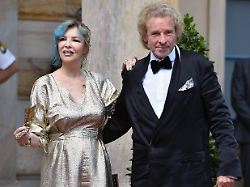 “Was a life choice”
Gottschalk regrets divorce “not a day”

For 42 years, Thomas and Thea Gottschalk have been considered the dream couple in the German celebrity world. The astonishment is all the greater when their marriage comes to an end in 2019. The “Wetten, dass ..?” moderator does not regret the divorce in the slightest.

TV legend Thomas Gottschalk once again spoke openly and honestly about the love affair with his wife Thea. The separation was not a spontaneous decision, the “Wetten, dass…?” moderator clarifies in an interview with the “Bunte” magazine. After all, when it comes to relationships, he always believes in the long haul.

In the meantime, he has at least been forgiven for his late change: After 40 years of marriage, he had neither “eloped with a 28-year-old ballet dancer” nor had he jumped lightly over “any stick”, according to the 72-year-old. “It was a life decision that I don’t regret a day,” Gottschalk explains his decision at the time. However, he does not reveal more soul life. He even hates talking about his private happiness “which will then be rated tomorrow on breakfast television by some celebrity expert who can figure something out”.

The moderator also spoke to RTL, together with his eldest son Roman, about his marriage. He “was the first to inform” the 39-year-old and his six-year-old brother Tristan, he says in an interview with Frauke Ludowig on “Exclusive Weekend”. “So I confided in both of them. I saw that as my duty.” He also asked his boys to stay “with mom”. “The gap I left you both have to close now. That’s your job,” he told them. His father’s announcement was “a shock” back then, Roman Gottschalk recalls. Under no circumstances did he want to stand in his father’s way because he saw that he was “happy”.

No praise for its modern counterparts

Gottschalk’s separation from his Thea became known in 2019 and he immediately confirmed it. The two met in 1972 and married in 1976. They have lived together with their children in a house in Malibu, California, since the early 1990s. Today Gottschalk is in a relationship with 59-year-old Karina Mroß, an employee at Südwestrundfunk (SWR).

Incidentally, Gottschalk has no praise for his young colleagues in the comedy and moderator scene in the “Bunte” interview: “This fun, which has driven Mike Krüger and me for half a century, is being lost more and more.” Gottschalk goes on to say that a weight of thought sets in that is foreign to him and his colleague Krüger. Both entertainers are celebrating the 40th anniversary of their 80s cult film “Die Supernasen” this year.

“Today, comedy is scripted and clocked through,” says Gottschalk, “without the courage to be rude and without room for spontaneity.” In addition, people would scold the moderator or presenter who couldn’t come up with a straight sentence “I usually can’t do that either, but at least it’s funny for me.” There just aren’t any more clowns like him and Krueger these days.