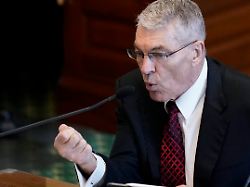 The head of the Texas security authorities attested to the police in the school massacre in Uvalde “miserable failure”. He does not accept the defense of the head of operations. The police officers would have protected themselves instead of the children. As a consequence of the massacre, the school is to be demolished.

After the school massacre in Uvalde, the head of the Texas security agency accused the local police officers of “pathetic failure”. Instead of quickly stopping the shooter at the elementary school, they wasted time looking for a key, Steven McCraw said Tuesday at a Texas Senate hearing. The protection of armed police officers was put before that of unarmed children.

McCraw said at the Texas Senate hearing that a sufficient number of armed police officers were on the scene just three minutes after the shooter broke into Robb Elementary School. Instead of intervening, they wasted valuable time looking for a key to the classroom in which the 18-year-old perpetrator was holed up. No key was necessary at all, the head of the public safety authority contradicted the statement by the head of operations.

19 children and two teachers were killed in the massacre in the primary school in Uvalde on May 24. The police are under massive criticism because the more than a dozen officers on site only intervened almost 80 minutes after the perpetrator entered the school. McCraw attributed the long wait to the “terrible decisions” made by operations manager Pete Arredondo. He had “decided to put the lives of officials before the lives of children”.

The elementary school students were completely defenseless. “The officers had guns, the kids didn’t,” McCraw said. “The officers had protective gear, the children didn’t.” In interviews shortly after the massacre, Arredondo had denied the accusation that he was solely responsible for the course of the police operation in the elementary school. At the same time, however, he admitted that the officials should have intervened earlier.

A survivor of the school massacre, 11-year-old Miah Cerillo, told a House of Representatives committee in Washington in early June how she desperately dialed 911 from the classroom. She said to the woman at the emergency call center “that we need help – and that we need the police in our classroom”.

McCraw told the Texas Senate that the operation failed to implement lessons learned from the 1999 Columbine High School shooting. “There is compelling evidence that law enforcement’s response to the attack at Robb Elementary was a bitter failure,” the security chief said.

The “Spiegel” also reports that the Robb Elementary School is to be demolished. Don McLaughlin, Mayor of Uvalde, announced this without giving a concrete timeline. “There is absolutely no way you can ask a child or a teacher to go back to this school,” he said.

After the Uvalde school massacre, the debate about stricter gun laws in the USA is back in full swing. On Tuesday, senators from both Democrats and Republicans introduced a bill that would slightly tighten gun laws. Democrats hope to get the bill through the Senate and then the House of Representatives in the coming days so that US President Joe Biden can sign the text into law soon.

Among other things, the draft provides for extended background checks on gun buyers under the age of 21. Billions are also planned for safety in schools and better psychiatric care in the country.