Wieduwilts week: Thank you, dear AfD, for your condition! 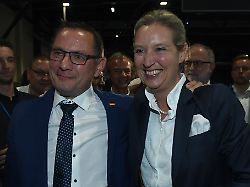 Actually, it’s the perfect storm for right-wing extremists: economic crisis, failure of integration policy, leftward shift in power, energy shortages. But the brown-fermented heap ferments, nothing else. A ray of hope in dark times.

Why did we tremble before the AfD – when it entered the Bundestag, gained approval ratings, when an FDP politician became prime minister in Thuringia with its help, when its ex-deputies threatened to become judges. But although the general weather situation seems favorable for right-wing extremists, it is not gaining ground.

In France you can see what chances the right wing has right now. Economic crisis, that’s always good for extremes. Attaching one’s own being left behind to external circumstances is part of the DNA of brown currents. There are always culprits: the Greens, pandemic policy, energy policy, the EU, gender.

The actual contradictions in energy policy would actually be an invitation to the only party in the Bundestag that has traditionally spoken out in favor of nuclear energy. Now the Union is doing it. The AfD originally argued for the exit from the exit. “Why should the poor body politic save energy when the left-green government is blocking clean nuclear energy?” the party could ask at the moment, and it probably does, but it just doesn’t catch on.

A blatant failure of integration policy could be observed in outdoor pools these days. With a view to the range of perpetrators, parts of the public pressed around as usual, only the tabloid spoke clearly of “grabbing” and pointed to the migration background of some perpetrators – also a through ball, actually.

On the surface, too, the federal government is almost lasciviously showing open flanks for the far right: The designated anti-discrimination officer Ferda Ataman called Germans “potatoes” and deleted thousands of provocative tweets, but the debate about this personnel issue comes from the far right without any fuss .

The Green Minister of State for Culture, Claudia Roth, can easily be accused of profound failure in dealing with the scandalous, anti-Semitic Documenta exhibition. (Roth did criticize the anti-Semitic imagery of an article there on Monday and said that artistic freedom also has its limits. But four days earlier she had stated that the origin of the curatorial collective “should not lead to suspicions in advance that it might be anti-Semitic.) And even if anti-Semitism is also cultivated in the ranks of the AfD, at least an articulated pro-Israeli attitude is part of the program – especially since it can be married so nicely with Islamophobia.But the AfD also played no significant role in this scandal.

Even the SPD speaks of leadership

The AfD even fails when it comes to the military. Federal Defense Minister Christine Lambrecht from the SPD jumps from blunder to blunder, as if she were some kind of Super Mario of embarrassments. This week she made outrageous claims about tanks. “The cheetah is not a tank,” she said in the plenum, “the cheetah is there to protect infrastructure by shooting this tube into the air.”

Not only does it sound like she’s talking to a four-year-old – what’s next, then the pipe goes “really boom boom”? In addition, the anti-aircraft tank probably a tank. Above all, however, he has, and this is something that every halfway temporally and spatially oriented media consumer knows, their pipes two. The AfD? Does not take place.

It must be bad for the AfD: Now even the governing party SPD is talking about leadership! SPD co-leader Lars Klingbeil claims “leadership power” and of course immediately gets headwind from the left, the AfD could do great now – but no, you don’t hear anything.

The destructive potential of the AfD is actually even greater because multilateralism is an integral part of Scholz’s turning point. There’s a lot to criticize: EU enlargement, extension of the majority principle, a threatening transfer union and a central bank flirting with economic policy, these are classic AfD topics. One hears: nothing.

The AfD is approaching the relevance of a Landserheft

This is not due to the skillful handling of the “old parties”, the “mainstream media” or the “system” with the AfD. On the contrary: members of the government repeatedly make stick mistakes when dealing with the sleazy party. Most recently, former Chancellor Angela Merkel had to accept that the Federal Constitutional Court attested to a violation of fundamental rights. She had commented from South Africa on the Kemmerich election in Thuringia, saying that this had to be reversed. A through ball and constitutionally at least careless.

The then Interior Minister Horst Seehofer (CSU) and the former Minister of Education Johanna Wanka (CDU) had brought similar successes to the AfD. More threaten: It has not yet been decided whether the refusal to chair an AfD committee in the Bundestag will stand up to the Basic Law.

So the location is, in a word: perfect. The air is filled with brown aerosol – but the AfD cannot find a fire. The party is approaching the relevance of a Landserheft that the visitor to a right-wing rock concert browses in the dixi toilet. They have hopelessly fallen out, the new board with Christina Baum is even more right-wing than the old one.

In the meantime, the AfD has been kicked out of a state parliament in Schleswig-Holstein, and the party conference in Riesa was chaotic, toxic, idiotic. The AfD is unable to deal with what is perhaps the most important issue of our century: warring Russia. She ferments and ferments.

I would like to thank you very much for that. And, a little worried, hope it stays that way.