With disappointment after Wimbledon: Kerber hopes for her “hand for the lawn game” 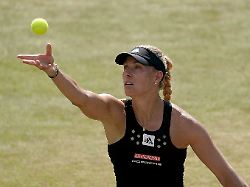 Without the injured Alexander Zverev, Angelique Kerber is the biggest German tennis hope in Wimbledon. You can count on her on the “holy turf”, even if the dress rehearsal ended early. The draw could have been worse.

It could have been worse, much worse. After all, the lot with the name Serena Williams was also in the pot. But Angelique Kerber was able to breathe a sigh of relief, her Wimbledon mission begins next week against Kristina Mladenovic, certainly not unknown on the tennis tour, but recently only successful in doubles. Kerber is the clear favourite, even if she didn’t have good experiences with a French woman during her dress rehearsal.

At least it didn’t go according to plan in Bad Homburg, but Kerber quickly checked off the quarter-final defeat against Alize Cornet in three sets. “Sport is just like that: sometimes you win, sometimes you lose,” she said succinctly. In Wimbledon it counts, if not for the world rankings this time. But that doesn’t matter to Kerber: “For me, Wimbledon is Wimbledon, with or without points.”

Oscar Otte thinks so too, alongside Kerber the only seeded German professional in the All England Club and in the absence of the injured Olympic champion Alexander Zverev the number one among German men. Behind the man from Cologne lies a steep ascent, and at the classic lawn in London he also benefits from the exclusion of the Russians, which has resulted in his world ranking status being withdrawn.

That was “of course a shame,” Otte told the Kölner Stadtanzeiger before his second start in Wimbledon, “there’s a little more money for that, that’s a nice bonus. And all players will lose points, not just one.” At the beginning there is a German duel with Peter Gojowczyk from Munich. Otte is in excellent form after the semi-finals in Stuttgart and Halle.

She “knows right what to do”

It remains to be seen whether this also applies to Kerber, the three matches at their home tournament in Hesse did not allow much knowledge. Last year she won the premiere in Bad Homburg and then made it to the semi-finals in Wimbledon. Lawn is her surface, on the pitch she knows “directly what needs to be done. I have a knack for playing grass,” she told the FAZ: “It’s all in me.”

This self-confidence cannot be shaken even by defeat. The competition in Wimbledon has to reckon with Kerber. And what about Serena Williams? After a year’s break, even the 23-time Grand Slam winner seems to have doubts about herself. “But Serena, who has achieved so much, may not need that much time to play at a high level again,” says Kerber.

At the start, Williams also meets a French woman for the world number 113. It will be Harmony Tan’s Wimbledon debut and Williams’ 21st tournament on Church Road. The draw could have gone worse for them too.