With “Top Gun: Maverick”: Tom Cruise dashes to the next milestone 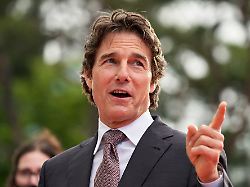 With “Top Gun: Maverick”
Tom Cruise dashes to the next milestone

35 years after the first “Top Gun” film, Tom Cruise once again plays the daredevil Maverick in the sequel – and rushes from one milestone to the next at the box office. Only two films have recorded more in the pandemic period.

Hollywood superstar Tom Cruise continues to rocket from success to success with his flick Top Gun: Maverick. In the meantime, the sequel to the cult film from 1986 has cleared another milestone: With over 900 million dollars grossed worldwide, according to “The Hollywood Reporter”, it is only the third film of the pandemic era to reach this number.

So far, only superheroes have managed to put Maverick in his place. Disney’s “Doctor Strange in the Multiverse of Madness” with Benedict Cumberbatch is currently in second place at around 950 million US dollars, followed by Sony’s “Spider-Man: No Way Home” and Tom Holland with a sensational 1.9 billion US dollars. Dollar. Cruise should at least be able to pass “Doctor Strange” with his fighter jet.

A closer look at the cinema success of “Top Gun: Maverick” makes it clear that the film knows how to convince around the world and not – as might have been assumed – only in the patriotic USA. According to industry website Box Office Mojo, the sequel has grossed $475 million in the US so far, and $427 million outside of the domestic market.

The film is also a milestone for Cruise personally: “Top Gun: Maverick” is already Tom Cruise’s most successful film in the USA. This is followed by “War of the Worlds” (2005), which grossed $234.3 million in the United States.

Tom Cruise once again plays the daredevil Pete “Maverick” Mitchell in the film more than 35 years after “Top Gun” (1986). The first weekend was already a personal success for the actor and gave him the best start in cinemas of his career. “Top Gun: Maverick” set another record on the opening weekend: the box office has never rang louder on Memorial Day weekend.