“Would just like to play golf”: Kaymer is expensive on the Saudi blood money tour 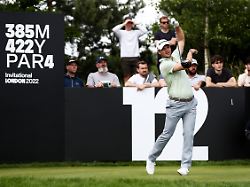 The German golf pro Martin Kaymer has to pay. Because he took part in a tournament funded with millions from Saudi Arabia, the European DP World Tour has now fined him a hefty sum. Kaymer does not regret his decision and says he understands “far too little” about politics.

In addition, World Tour players who teed off at Centurion Club earlier this month will be suspended from the Scottish Open and Barbasol Championship (both July 7-10) and Barracuda Championship (July 14-17). . The major tournament around the British Open is exempt from the ban.

“The money is one thing, but I would just like to play golf,” said Kaymer on the Sky TV channel. But he doesn’t regret his decision. “I’m not against a tour. I’m a player who would like to play everywhere. And all the political things: who am I to really rate it. I know far too little,” said the former world number one.

Kaymer is already planning the next Saudi mission

“Every action someone takes in life has consequences,” DP World Tour boss Keith Pelley said in a statement. It’s no different in professional sport: “Especially when someone decides to break the rules. That’s what happened here with several of our members.” The North American PGA Tour had previously suspended some players.

The LIV series is criticized because of the millions invested in Saudi Arabia. The background is that the country, which has been criticized for human rights violations, is trying to improve its reputation with lucrative sporting events.

Kaymer, who has been playing at the BMW International Open in Eichenried near Munich since Thursday, finished 15th in the LIV premiere and recently defended his participation. Should World Tour players participate in further LIV events, further consequences have been threatened. Next stop of the Saudi series is from June 30th to July 2nd in Portland, USA. Kaymer is also on the starting list for this tournament.